Bad sportsmanship for sure, but a win is a win.
8 comments:
Posted by Speed Endurance at 00:37 Links to this post

This weekend Ian Thorpe competed at the Euro Meet in Luxembourg. His efforts of 50.82 (heats) and 50.79 (7th in the final)  were both post-comeback bests in the 100m Free.

The real news regarding Thorpe's comeback came not so much from his times in Luxembourg, but the last minute change to his training regime in the lead up to trials, less than 7 weeks away.

According to Nicole Jeffrey in The Australian, Thorpe together with Gennadi Touretski, Leigh Nugent and performance scientist Bernard Savage have come up with the following late changes to try and save his attempt to make London 2012:

Fitness - Thorpe is lacking cardiovascular fitness and needs to get leaner. For the first time during his comeback, Thorpe will turn to dry land training. This means a lot of skipping, cycling and treadmill work as there is not enough time to get this fitness back simply from pool work.

Keep Reading >
21 comments:
Posted by Speed Endurance at 22:54 Links to this post

Sun Yang isn't showing any early season rust, swimming in torrential rain he raced to 3:42.89 in the 400m Free at the Miami Super Challenge. According to Britain's Michael Jamieson on Twitter the swim came off even splits.


7 comments:
Posted by Speed Endurance at 12:42 Links to this post Winning another global title in the 800m Free was a great way for Adlington to regain her self-belief going into 2012, and she did it in style. After tracking Lotte Friis for the entire race, she put on the burners in the last 50m with a split of 28.91. She also made a step forward in the 400m with a time of 4:02.84 at British Nationals. While she wasn’t able to reproduce that time in the 400 final, she still swam well enough to win the silver medal. Adlington still needs to find a second to get down to Pellegrini’s winning time from Shanghai in the 400 Free, but all signs are pointing in the right direction ahead of a home Olympics. 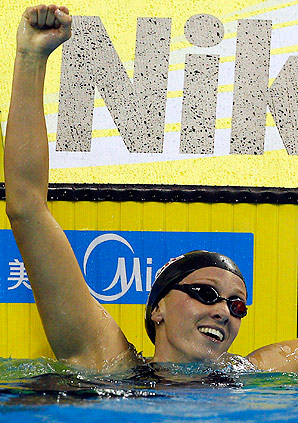 Vollmer's 56.47 was one of swimming's most unexpected performances of 2011. It was not that she was unfancied to win the 100m Fly, but to swim the 5th fastest time ever and give a seemingly untouchable world record a scare certainly did come as a shock. Vollmer dropped a clue back in April when she swam 57.5 untapered. The American also had a great year as part of a dominant USA 4 x 100 Medley team that shook the LC world record and broke the record SC. She also had a strong anchor leg in the 4 x 100 Free relay and would have won gold for the USA, had she not come up against Femke Heemskerk on top form.

In the Shanghai 400m Free final, Pellegrini swam a tactically perfect race. By keeping pace with the field until 200m (turned 5th in 2:02.30) and then unleashing an incredible 1:59.67 last 200m split she nullified all her opponents weapons and played to all of her strengths. The performance was so good, that if she swims the exact same race this summer you couldn't see anyone getting past her. She then backed up her 400 win with a victory in the 200m Free with another tactical masterclass. This time she didn't panic when Femke Heemskerk went out in world record pace, instead she put in her burst between 100m and 150m. The Italian is going to have company in the form of Missy Franklin in the 200m Free and may struggle to win the double in London, but 2011 was a masterclass in middle distance Freestyle from Pellegrini.


Keep Reading >
71 comments:
Posted by Speed Endurance at 23:14 Links to this post