Alshammar pregnant - but swimming career might not be over 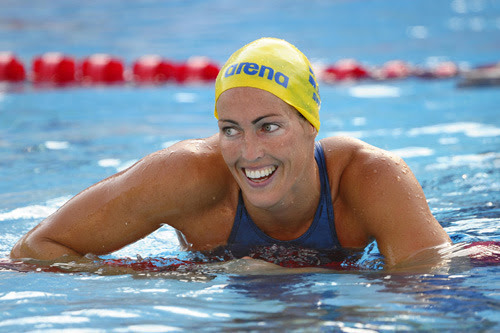 Alshammar (35) reveals that she and her coach and partner Johan Wallberg are expecting in an interview with Swedish national broadcaster SVT today.

"I've got a new challenge and a different perspective on life" says Alshammar, who is expecting her child in june.

"It's a big change for me, of course physically, but also mentally. It brings along with it a lot of thoughts and philosophizing about life which are about far bigger subjects than before".

Alshammar is a two-time long-course swimming World Champion, but in addition has ten short course titles. The Olympic Gold medal though has eluded the two time silver medalist from Athens 2000. A grand total of 71 international championships medal makes her one of the most successful athletes ever.

The freestyle and butterfly sprinter, who has taken the crown and $100,000 cheque of World Cup Winner on several occasions is held in high regard in her native country, widely thought of as one of their all-time great athletes - regardless of sport.

Although out of the World Championships this year, the 35 year old refuses to draw a line over her swimming career.

She says shes been training during her pregnancy, albeit not as usual.

"It's strange to feel that no matter what I do my physical condition gets worse" jokes the swimming star with a tattoo that reads "Diva".

"One of my greatest dreams is to continue to try to compete and see if I can still improve. I still have a longing to be the fastest in the World"

The safety and well-being of her child naturally comes first, but the Swedish swim Queen does not even rule out swimming in Rio for the next Olympics.

"Never say never. I find swimming really fun and as long as I feel that way I will continue to do my sport. I don't promise anything, but it would be really great if that could happen."

Alshammar has not previously revealed in public that Johan Wallberg in addition to being her coach also has been her boyfriend for the last couple of years. Wallberg and Alshammar returned this year to Sweden after several years of training and traveling mainly abroad.

"Every relationship has its challenges, no matter if it is of a private or professional nature. It has been important to us to separate those two roles, so that we could focus on swimming" says Alshamar.

Listen to the interview here:
(In Swedish)

Posted by Sander Englund Smørdal at 21:12